Due to Hubby buying an enormous bag of capsicums at the market last weekend, we have been having a very capsicum orientated week.  We have had several bowls of coleslaw made with added capsicum of course lol, we have had a Spaghetti Bolognese made with capsicums and also Burritos made with capsicums in the sauce and also homemade burgers complete with capsicum.  Now, while that got rid of quite a lot of capsicum, we still had alot left (the bag was very large, at least 5-6kgs of capsicums!).  So while Hubby and I were home alone on Sunday night, we decided to try a new recipe and make Stuffed Capsicums.  I searched the internet and found this recipe:  Stuffed Capsicums

The result,,,,,,YUMMO!  The only difference we would make to the recipe is to add more spice or chilli sauce maybe next time just to give it a little more pizzazz but as a starting point this was really nice.  We are going to try this one with the kids and I think at least half of them will like it.  I figure that even for those that don't like capsicum they can always just eat the filling lol, I know they will like that bit! 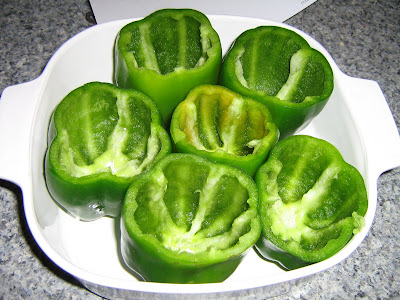 Fry the onion.
Add mince and break it up well.
Add pasta sauce, water and rice and simmer for 10 minutes.
(we use hubby's grandma's frying pan, somehow it always tastes better cooked in that lol) 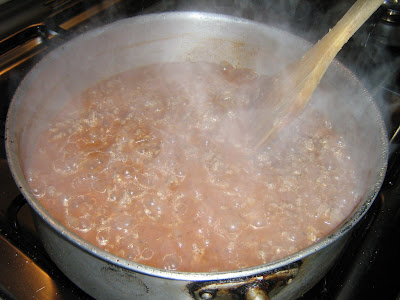 Add salt and pepper to taste.
Stuff the capsicums with the meat mixture. 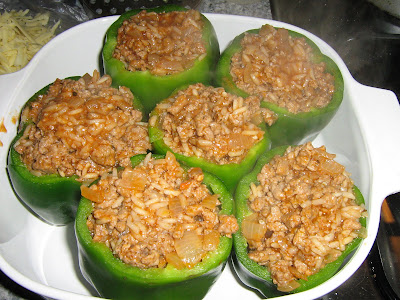 Pour the can of soup around the capsicums.  We also added about half a can of water as well to prevent it from drying out. 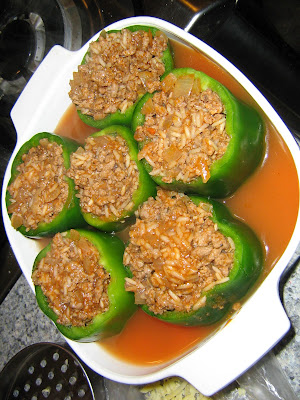 Sprinkle grated cheese over the top of each capsicum. 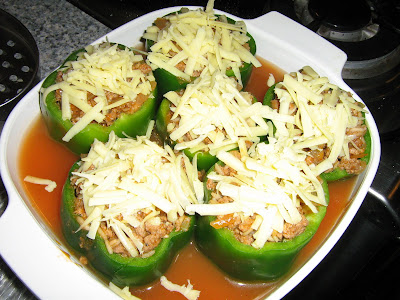 Bake in moderate oven for 55 minutes or until capsicums are soft.
Enjoy! 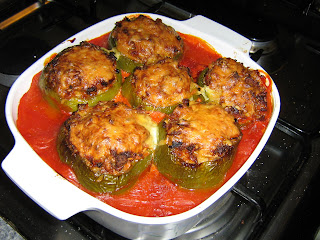 We left these in a little too long as you can see by the cheese but these were delicious.  We had two each and then had another 1 each for lunch the next day.
This would be a great meal for a crowd as it is so easy to make and takes very little time!
Posted by OurGangof7 at Tuesday, June 14, 2011