Aaah this recipe, I truly could eat a whole batch of this stuff by myself. 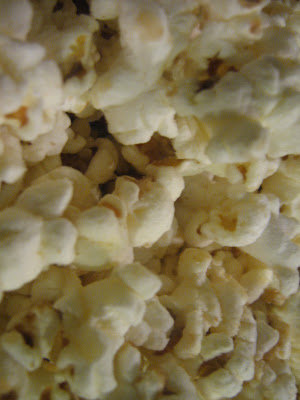 I remember the first night I ever tried Kettle Corn.  It was a night that Hubby and I went up to Lobethal to see the Christmas Lights.  Lobethal is a small country town in the Adelaide Hills that each Christmas comes alight with many of it's homes adorned with Christmas lights and boy do they do a fantastic job.  The small and normally quiet town comes alive with people, never ending streams of cars going up and down the streets, the markets open late into the night full of great ideas for last minute gifts.  And this particular year was a little street van selling Kettle Corn.  They had tasters to try and we had to try it.  They said it was Sweet and Salty.  I have to say that didn't appeal to me but once I had a bit I wanted more.  Their Kettle Corn had a Cinnamon taste to it too which completely topped it off.  Sadly I haven't been able to replicate their recipe for it and even more sadly I have never been able to find those same people selling it again.  There are plenty of places selling Kettle Corn these days at various shows and markets throughout Adelaide but none compare to that initial version we had.

I scoured the internet trying many different recipes for the stuff.  Some worked better than others.  Even now that I have found one I do like, I'm certainly not going to puff out my chest and say it is the worlds best or even that I succeed in getting it just right each time I make it.  We have had our failures lol but hey, it certainly isn't an expensive thing to make so it isn't the end of the world if it doesn't work.  Nine times out of ten though this recipe has turned out really nice and I would have to say it is my favourite of all those I have tried.  Sadly I don't know where I got this recipe from.  I had so many little pieces of paper laying around my computer desk for a while with various versions written on them it was just ridiculous.  Thankfully this one was about the 4th one we tried and it was a hit, so we will just stop right here and keep this one as the one we make every week for our Family Movie Nights.  This recipe makes enough for 7 of us to have a dessert sized bowl each (if I made more I would eat too much lol).


KETTLE CORN
1/4 cup Vegetable Oil
1/2 cup Popping Corn
1/2 cup Icing Sugar
1 tablespoon White Sugar
1 tablespoon Brown Sugar
Sprinkle of Salt to taste
Place in a large pot with a lid, the Vegetable Oil.
As the oil begins to get hot, reduce the heat to medium and add the Popping Corn.
As the popping starts, shake the pot every few seconds to ensure as many of the little kernels pop as possible.
When the corn has all popped, remove from heat and add in the Icing Sugar.
Shake again to coat the corn really well.
Sprinkle on the white and brown sugars
Place back on a low heat for a further minute.
Shake often ensuring that the sugar doesn't all just fall to the bottom of the pot (I usually stir it around with a wood spoon a couple of times to get the sugar mixed through thoroughly).
You need to ensure that the sugar doesn't just burn on the bottom of the pot, hence the continual shaking.
Add Salt at the last minute.  You don't want to drown it, you just want a slight salty taste to it.
Now sit back with a good movie and enjoy the tastiest popcorn in the world :-)
Posted by OurGangof7 at Tuesday, September 13, 2011

Email ThisBlogThis!Share to TwitterShare to FacebookShare to Pinterest
Labels: Snacks